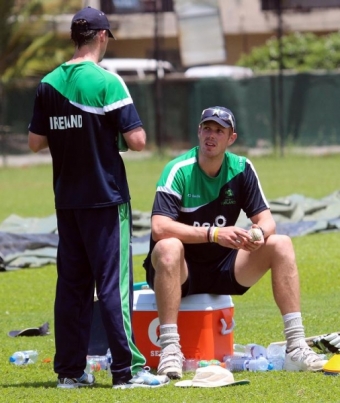 Fast Bowler Boyd Rankin is the latest to give us his views from Colombo, he chats about the disappointment of Wednesday, waiting on a favour from Australia and his mixed emotions at what could be his last appearance for Ireland.

Of all the Asian countries that I have been to, including India, I like Sri Lanka best. I think the people here are more like Irish people, they are just laid back and always have a smile on their faces. It’s very green here and there are a lot of trees and, coming from a farming background, I like that.

What’s very different to Ireland and England is the heat and humidity and I’m sure you could see on the TV that all of us were sweating buckets out there, but we are getting used to it.  It is difficult being a bowler and getting to the top of your mark and having to find a way to dry your hands every time, but that’s just one of the challenges you face out here. I have found it easier the last few days than the first week or so, so I guess that means we’ve acclimatised.

Having Craig McDermott has been a great addition for all of the lads. He’s a typical Aussie and very much has his own views and opinions and he sticks to them. He has changed my grip and is trying to get me pitching the ball up in the first six overs. On these wickets and these conditions, he reckons bowling closer to the batsman is the way to go, so that’s what I’ve been trying to do. What I really like about having him as part of the coaching set-up is just picking his brain, chatting to him about what he’s done and and where he’s been because he’s been all over the world and he’s done it all.

Things didn’t go to plan against the Aussies on Wednesday, but those are the tight margins we have to work within in Twenty20. If you get it slightly wrong, you get hit for four or six, but get it right and it could mean a wicket. Such a low total obviously wasn’t ideal, so we had to go for the wickets from the beginning. Because we were so attacking, a few things started going wrong. My plan against Shane Watson was to try and bowl quite straight at him because he likes a bit of width, but the ball didn’t swing for me and I bowled quite a few wides.

But that’s the way Twenty20 goes, it’s up and down and you have to be able to think on your feet and expect any situation. A total of 123 was what we had to bowl at and we had to go for wickets straight away. That didn’t work, but it was the first time since we’ve been here that the top order hasn’t fired and hopefully it’s a one-off.

I guess I do feel a bit of extra pressure because Monday’s game against West Indies could be my last for Ireland. I’ll be feeling all sorts of emotions I’m sure but I’ll just go out and try to do what I have been doing for the last few years and try not to think about it.

I came to a point in my career when I had to make a big decision and retiring from Irish cricket will hopefully prolong my career. I’ve suffered badly from a few injuries in the last few years and it’s basically come down to workload. I have to reduce mine and I’m going to focus on my career in County Cricket with Warwickshire for the next few years.

It’s very frustrating to have to make this decision but I couldn’t keep going with the workload between county and international cricket, so something had to give. I’ll focus on Warwickshire for the time being and go from there, but in a few years’ time who knows? There is a chance that I could come back and play for Ireland again.

My family has always supported me with my cricket and of course, they’re slightly disappointed. But they always back me and agree that the decision I’ve made is the best for me at this point in my career.

I’ve put all of that out of my mind in the build up to and during this ICC World Twenty20, though, and it’s been a great trip with all of the boys.

Australia play West Indies this evening and we, of course, hope that Australia can pull one off for us and then it will be a straight shoot out between us and West Indies. I think it’s going to be tight, so we’ll just have to wait and see.

We’ve had a few good training sessions in preparation for playing our second group match. We’ve put in the hard yards and are doing our homework so hopefully we can execute our plans better this time around and get the win we need. Yesterday, after monitoring and breakfast, we had a tough two-hour training session where the bowlers bowled and the batters batted, followed by some fielding. After that it was lunch and a bit of time off, and in the evening all the lads without wives or girlfriends over in Colombo with them went to a hotel near the coast and had some food and a couple of drinks together.

It’s nice to get a chance to unwind with the lads before such a huge game in two days’ time - let’s hope it is for a spot in the Super 8’s.