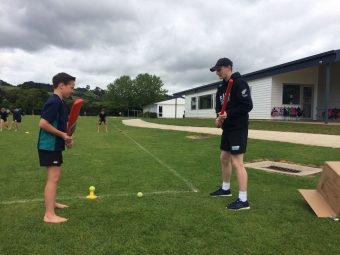 Mark coaching at the local school

The Ireland Under 19 squad overcame Scotland, Denmark and, hosts, Jersey to qualify for the ICC World Cup in New Zealand in January 2018.

Two players who will be looking to hit the ground running from the first match against Sri Lanka on January 14th are Sam Murphy and Mark Donegan.

YMCA CC’s Murphy and Donegan, who plays for The Hills, travelled to New Zealand four weeks ago in search of experience playing in those conditions. Just as importantly perhaps, they are also learning about life outside of cricket, living away from home, maturing as young people and in Sam’s case getting used to early starts working on a farm!

We spent weeks jumping from place to place but we are now renting a house from a friend of someone in my club and we are settling in nicely.

I’ve just started coaching in schools travelling between 30 minutes and an hour to get there. In fact, I’m writing this on the way there, I thought I’d use the time wisely. The kids I’m coaching range in age from 3 to 11 years old.

In the evenings I’m coaching groups from the club I will be playing with, Kano Cricket Club. Sam is working on a dairy farm for the last three weeks and is really starting to enjoy it apart from the early starts.

We have been training three times a week with a match each Saturday. Tuesday’s and Wednesday’s are Northland training, which is representative level, and Thursday’s we both train with our clubs, myself with Kano and Sam with Maungakaramea CC.

I’ve played three matches so far but they’ve all been friendlies. The team is a mix of clubs just for this pre-season competition. Next week is the first game on a grass wicket and the last of the warm-ups before the season gets started. Sam has played two games, with the other rained off, nothing new there!

Next week, I’ll be playing at the Cobham Oval. I’m really looking forward to that because all of our group games in the World Cup will be played there so it’ll be great to have a look around.

So far so good for Mark Donegan in Whangerai, New Zealand it seems. Stay up to date with how Sam and himself are getting on throughout the winter behind the Under 19s World Cup 2018 button on the homepage.