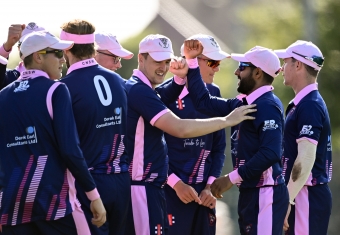 Under warm autumn skies, Donemana skipper William McClintock won the toss and sent YMCA in first. McClintock’s opposite number, Jack Tector was the early aggressor with the bat hitting 62 from 48 balls, including six fours and two sixes.

The YMCA century came up from 85 balls for the loss of three wickets, but with the score poised at 109-3 in the 16th over the North West side then stepped up the pressure, squeezing the YMCA batters in the last 4 overs through the accurate spin of Jordan McGonigle (2-25), Andy McBrine (2-24) and Dwayne McGerrigle (4-15). YMCA lost 6-22 from the last 25 balls of the innings to finish on a below par 131-9 from 20 overs.

Needing an early breakthrough, the YMCA bowlers initially came up against a resolute Andy McBrine (4) and Dean Mehaffy (17) who put on 22 in the first five overs without loss. After both openers then fell within the over following, that brought twin brothers Gary and William McClintock together. The pair put on 64 at a run-a-ball and set Donemana up for what seemed an achievable victory.

With the score on 88-2 in the 15th over, Jack Tector brought back Curtis Campher who removed both McClintock’s in the space of three balls. From there Donemana collapsed, losing 7-14 as the YMCA bowlers – backed by brilliant fielding – finished Donemana’s hopes.

In the end it was a comfortable 29-run win to YMCA, but the match definitely turned on fine margins. Jack Tector was named Player of the Match.