Yuvraj Singh sends his support for the Big Bike Ride 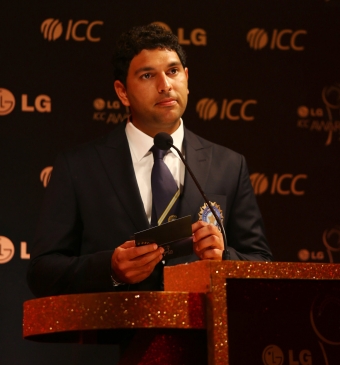 Yuvraj Singh has sent a message of support © ICC/Getty Images

Gary Wilson and William Porterfield’s final push in the Big Bike Ride has been given a big boost with a message of support from one of Indian Cricket’s biggest star’s, Yuvraj Singh.

World Cup Winner Yuvraj Singh has sent a message of support to Ireland cricketers Gary Wilson and William Porterfield as they look set to complete a marathon cycle across Ireland to raise money for Cancer Research.

Cancer is an issue very close to Yuvraj Singh, he himself was diagnosed with lung cancer at the start of 2012. He travelled to the United States to have chemotherapy treatment and was successful in fighting cancer. Remarkably just months later, he returned to international cricket and played in the recent ICC World Twenty20 in Sri Lanka. When he heard of the efforts of Gary, William and their Big Bike Ride, he sent the following message.

‘I am delighted to send my very best wishes to my friends from the Irish Cricket Team, Gary Wilson and William Porterfield. They are taking on a great challenge in cycling across Ireland to raise funds for such a vital cause. Having fought and survived cancer myself I know just how important the fundraising is and I think that Gary and William’s Big Bike Ride is a brilliant way to highlight the cause and raise money for those fighting cancer. All the very best from India, Your Friend Yuvraj Singh.’

Yuvraj also sent a tweet to the boys on Saturday afternoon as they were completing the final miles into Belfast.

The support will be very poignant for Gary as it was in October 2010 that Gary’s mum, Iris, was diagnosed with lung cancer. Determined to fight her illness all the way, only one year later she was back to reasonable health, and well enough to see Gary get married to his wife Jennifer. Unfortunately, the following Christmas it was revealed the cancer had spread, and in April 2012 Iris Wilson sadly passed away.

Gary and William are now approaching Belfast where they will complete the journey today on Saturday the 13th of October having left Cork on Tuesday and completed over 380 miles in total.