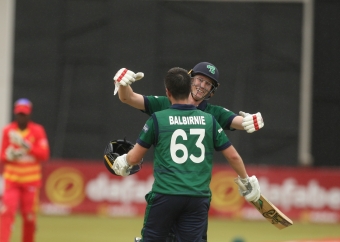 HARARE, Zimbabwe – Centuries from captain Andrew Balbirnie and Harry Tector – as part of a record third-wicket stand of 212 - weren’t enough as Zimbabwe won a thrilling first ODI of the series in Harare by three wickets (DLS), with Clive Madande winning the match with a four off the final ball.

A lengthy rain delay reduced the target from 115 off 102 deliveries to 39 off 22. Wickets tumbled and sixes sailed over the rope in a chaotic twenty minutes of play, which ended with Zimbabwe needing four off the final ball of the match. Heartbreakingly for Ireland, but to the delight of the home crowd in Harare, Madande pumped Graham Hume’s final ball down the ground to the boundary, completing a famous win.

Zimbabwe won the toss and sent Ireland in to bat first, with Balbirnie top scoring in his 200th match for Ireland with 121 not out from 137 balls. He timed his innings superbly after Ireland lost two wickets within the first ten overs, including that of Stephen Doheny who was out for three on his ODI debut. Balbirnie, aided by Tector at No. 4, rebuilt superbly, accelerating during the last ten overs to set Zimbabwe 289 to win.

The captain’s innings came to an unfortunate end in alarming fashion, when he was struck on the head by a chest-high beamer from Brad Evans, which deflected off Balbirnie’s bat and into his helmet. Although the stretcher was brought out Balbirnie was eventually able to leave the field under his own steam but took no further part in the match.

After Balbirnie departed, all eyes turned to Tector to see if he could complete his third ODI hundred in just his 24th innings in the format. He was joined for brief cameos by George Dockrell and Curtis Campher, who each looked to attack from the get-go.

Tector reached his three-figure milestone in the last over of the innings, roaring in delight as he came back for a second run to take him to the hundred. He fell just four runs short of breaking the Ireland record for the fastest batter to score 1,000 ODI runs, although he has another five innings leeway to claim Paul Striling’s record of 29 innings.

Zimbabwe lost Wesley Madhevere early in their innings, after he was caught by substitute fielder Tyrone Kane, Mark Adair making the breakthrough inside the first five overs.

From there Innocent Kaia and Craig Ervine built a watchful partnership, scoring 40 off the next 49 deliveries to steady the Zimbabwe ship. There was a reprieve for Kaia when he was dropped by Josh Little off Adair, seemingly squandering some good pressure built by the bowler but the reprieve wasn’t too costly. Campher held onto a chance in the very next over to send Kaia on his way.

A stunning caught and bowled gave Ireland their third, Tector back in the game and nearly colliding with his teammate in the field but managing to just cling on to the ball to dismiss Craig Ervine. Gary Ballance was next to go after a good partnership with Sikandar Raza, courtesy of another fantastic catch this time by Graham Hume on the boundary.

The match continued to swing one way and then the other. Zimbabwe ramped up the pressure once more with Raza and Ryan Burl at the crease. Burl hit Dockrell for consecutive boundaries, including a huge six back over his head, to reduce the equation to 136 from the last 20.

With rain starting to fall, Ireland were two runs ahead on the DLS as the covers came on, with play unable to continue for over an hour. When the players were finally able to get back on the field, with Zimbabwe chasing a reduced target, the fans were treated to a hugely entertaining final passage of play.

Sikandar Raza was out second ball going for the big shot, before Ryan Burl was six and out in the final over, leaving the equation down to 11 off four. With Clive Madande the senior batter, some good running brought it down to four off the last ball with him on strike to complete the tightest of victories. A tough loss for Ireland but an incredible game of cricket.

The sides will do it all again at the same venue on Saturday, 21 January with a 7.15am start (Ireland time).