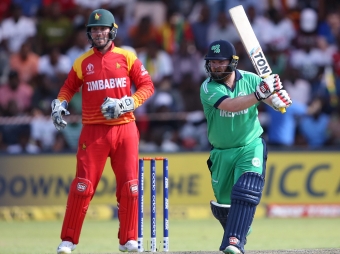 Paul Stirling in action against Zimbabwe in March 2018

HARARE, Zimbabwe - The Zimbabwe Cricket Board has announced a strong 16-man squad for the six-match white ball series against Ireland in July. The two sides will contest three one-day internationals and three T20 Internationals in the first meeting of the two sides on Irish shores since 2003.

While this will be the first time the African side will have visited Ireland for 16 years, Ireland will be looking for revenge after the Zimbabweans convincingly defeated the Men in Green by 107 runs at the ICC Cricket World Cup Qualifier in Harare in March 2018.

Zimbabwe will play two ODIs and two T20Is against Netherlands in Holland, before heading to our shores for three ODIs and three T20Is.

You can read more about Zimbabwe in our 2019 Ireland Cricket Magazine - the season guide for Irish cricket fans.

Tickets are on sale through Ticketmaster now.

@ZimCricketv have been boosted by the return to full fitness of captain Hamilton Masakadza and @BrendanTaylor86  ahead of @KNCBcricket tour that consists of two ODIs (19 & 21 June) and as many T20Is (23 & 25 June), before we proceed to @Irelandcricket. Here's our full squad . . . pic.twitter.com/L3lYDb77Tw