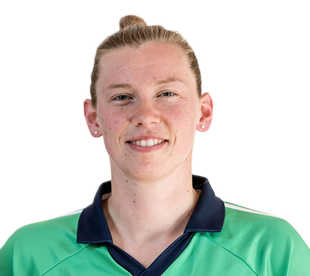 Jenny is a big-hitting middle-order bat who made her debut again Pakistan in 2014 during a Tri-Series in Qatar when she took 3-40. Another player who started out as a bowler, Jenny’s career highlights include beating South Africa at home in 2016, playing in the ICC WWT20 Bangladesh in 2014 and winning the ICC WWT20 Qualifiers in Thailand in 2015.

Outside of cricket, Gray is a research student in microbiology and works on the family farm. She also enjoys hockey, badminton, cycling and traveling.

Her ambitions are to play as much high-level cricket as she can while enjoying it and making friends along the way. She also hopes to be successful in her career, travel the world and have a family.

Her idol growing up was Jacques Kallis and the three players she would choose to have in her team are Ellyse Perry, Suzie Bates and Meg Lanning.