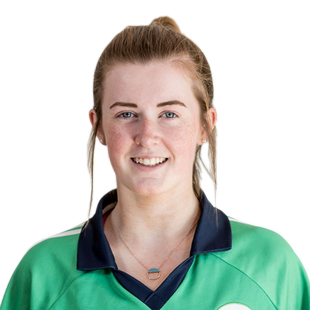 Lucy is a diminutive cricketer but bowls a heavy ball and is lightning quick in the field. She received her first cap at the tender age of 13. It was July of 2013 and Ireland were taking on Pakistan in Solihull. Lucy’s dad Peter – a former international himself – had been away for six weeks reporting on rugby in New Zealand and he surprised her by arriving at the ground that morning. His presence made that day even more special.

O’Reilly’s career highlights include hitting the winning runs against Bangladesh in Bangkok to win the ICC WWT20 Qualifiers for the 2016 ICC WWT20 and dismissing Meg Lanning in a T20 in Dublin in 2015.

Finishing school this year, Lucy hopes to study Law in University and dreams of becoming a successful lawyer. She also enjoys studying languages and psychology. In cricket, her biggest ambition is to help Ireland to be in the top eight teams in the world.

Lucy’s cricket idol is Katherine Brunt because of her talent and her aggression on the field. If she could choose three people to play in her team they would be AB de Villiers, Suzie Bates and Katherine Brunt.