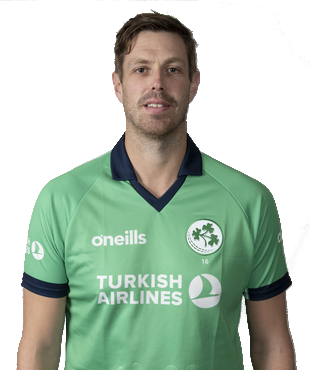 Ireland’s tallest player at 6 foot 7 inches and has used his height to good effect in many of the matches he has played. He was first capped in 2003 against Free Foresters at Eton College. An indication perhaps of the effect injuries have had on his career is that since that match Ireland have played 221 matches but Boyd has only gained 78 caps in all.

In his 78 matches to date Boyd has taken 109 wickets with a best bowling performance of 5-39 against Namibia in 2008 at Windhoek.  Another wicket Boyd will remember, no doubt with affection, was that of Ed Joyce for 1, clean bowled, in the World Cup in 2007 when Ed was playing for England against Ireland.

Boyd has played county cricket initially for Middlesex but has subsequently moved to Warwickshire where he has the benefit of being coached by Allan Donald, the South African International. He has also played for the England Lions with distinction and is highly rated across the county cricket circuit. A fast bowler as tall as he is undoubtedly has the ability to worry many batsmen.

Boyd had an exceptional ICC World T20 Qualifiers in the UAE and even won three man of the match awards in a row during the group stages. Another from a good cricketing family, two of his brothers Robert and David have played for various other Irish representative sides.