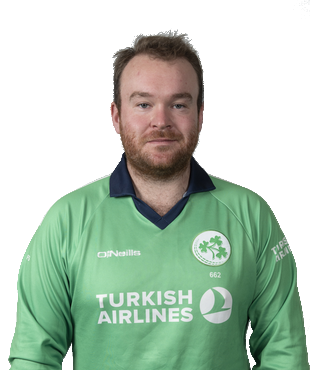 Paul is an exciting opening batsman who strikes the ball hard and is seen as one of the most talented young cricketers in the world at the moment. In addition he is a useful off spinner, working well in conjunction with George Dockrell on many occasions.

Another of the younger brigade for Ireland, Paul was first capped against UAE in Abu Dhabi in March 2008, aged 17. Since then and up to the conclusion of the 2012 ICC World Twenty20, Paul has represented Ireland 111 times.

In those matches he has scored 3,383 runs including 6 centuries. Of those the highest was 177 against Canada at Toronto in 2010. Four of his centuries came in the 16 matches he played in 2011, including one of 113 against the old enemy, Scotland, at Edinburgh.

As a bowler he has taken 43 wickets and has also taken many catches for Ireland, a total of 46 in 111 matches, putting him 12th in the all time list for Irish fielders.

Paul naturally takes to T20 cricket especially well with his devastating strike-rate making him very dangerous at the top of the order. This was especially well highlighted during the qualifiers for the 2012 ICC World T20 where his final three innings, in three must-win games for Ireland, were all crucial - especially his stunning 79 in the final against Afghanistan.

Paul has played his club cricket for Cliftonville, though he is now playing county cricket for Middlesex, whose supporters are now enjoying the all-round package he offers them as he stars regularly in the shorter formats for them at Lord’s. Paul’s father, Brian, is also an International Sportsman, having refereed International Rugby Football.