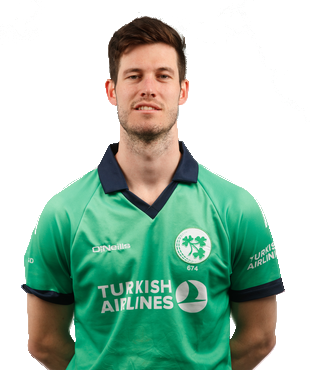 George Dockrell has already been capped by Ireland on 109 occasions. He made his debut against Sri Lanka Board in Colombo on 31st January 2010 at 17. A fine slow left arm bowler who has taken no less than 223 wickets with three five-fors in an Innings.

George played for Leinster CC in Ireland, though has subsequently been signed up by Somerset where he was a regular performer. Notwithstanding his youth, he has turned out regularly for Ireland in Twenty20, a form of the game where one might have thought more experience would be needed. However George has always performed well at this and, indeed, every other level he has played at.

His outstanding bowling performances for Ireland were 5-37 v Kenya at Mombasa Sports Club in 2012, and 5-71 v Namibia at Stormont in 2011. He reached 100 wickets for Ireland in only 60 Matches. This was quick at the best of times but with so many of his matches being ones in which he could only bowl 4 overs, it makes his performance even better.