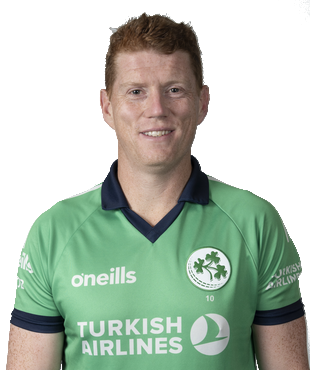 Kevin is a man who will forever be remembered for one particular innings, though that alone will not do justice to one of Ireland’s most talented cricketers. That innings was, of course, his wonderful knock of 113, off only 63 balls, which enabled Ireland to resurrect their record chase of 327 from the desperate low of 111 for 5, to beat England by 3 wickets.

His century was reached in only 50 balls, which made it the fastest ever in World Cup history. That innings contained 6 sixes and 13 fours and will live long in the memory of cricket lovers across the world.

Kevin made his debut against Sussex at Castle Avenue in June 2006. As of the end of the the 2012 ICC World Twenty20, Kevin has played 186 matches, which is the 3rd highest of those who have played for Ireland. He has scored just under 4,151 runs (3,957 to be precise). This is 4th highest in terms of aggregate scorers for Ireland. Turning to bowling, Kevin has taken 141 wickets, and is the leading catcher for Ireland with 90 catches in all.

Kevin comes from a family steeped in cricket, all of whom have played their club cricket for Railway Union. His father, universally known as “Ginger”, played 52 times for Ireland (during a time when Ireland played significantly less internationals) and captained them on occasion. Kevin and his brother Niall have emulated their father in captaining Ireland, becoming the only father and two sons to do so.

While Kevin has played most of his cricket in Ireland, he has played in County Cricket also, representing Gloucestershire, Nottingham, Somerset and Leicestershire.