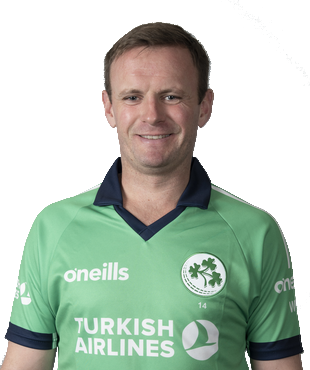 William Porterfield, captain of the Irish Senior team, has played for Ireland at every level from under-13 upwards. He also captained at just about all levels and in many ways highlights the success of the developmental aspects of Irish Cricket.

‘Porty’ was first capped against Namibia in Castle Avenue in 2006. He took over from Trent Johnston as captain of the Irish team and has to date been captain on over 100 occasions (the most by any Irish player) and with 62 wins is the most successful Irish captain of all time.

As of the end of the 2012 ICC World Twenty20 he has won 155 Caps. An opening bat, he has scored 4,700 runs making him Ireland’s leading runscorer to date, and has scored 8 centuries, also a record for Ireland. He is also acknowledged to be the outstanding Ireland fielder and has taken 76 catches (though he is only the third highest catcher for Ireland to date).

Porty has had many outstanding performances for Ireland and his highest score is 166 v Bermuda at Castle Avenue in 2007 in the ICC InterContinental Cup. Many, however, would view his 85 against Bangladesh in the 2007 World Cup as one of his outstanding knocks, leading Ireland to their second victory over a full Test playing side in that tournament. As captain, though, it is hard to look beyond his captaincy of Ireland in their win over England in Bangalore in the 2011 World Cup.

Born in Donemana, he is proud cricketer from the fine cricketing tradition of the North West region. At Club level in Ireland he has represented Donemana and Rush. He spent time with the MCC Young Cricketers and subsequently has played First Class Cricket with Gloucestershire and following a prolific season there in 2010, he was offered a contract with Warwickshire where he now plays.

Further honours came in 2012 as a side made up of some of the best players from Associate and Affiliate teams was put together to face England in Dubai in January 2012. The three-day match was part of England’s preparation for a series against Pakistan later that month. Porterfield captained the squad and was one of four Ireland players included.