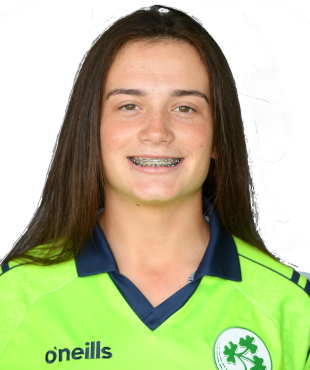 Lara is a fiery fast bowler who loves the battle between bat and ball. She was first capped against England in Abu Dhabi in 2017 and is lost for words when trying to describe the feeling of taking her first wicket for Ireland in that same match.

A self-confessed cricket tragic, Lara loves to cook and bake for both her family and her friends in school when she can fit it in around watching, training and playing cricket. She also loves to play other sports like camogie, gymnastics and tennis.

Her ambition is to play in a World Cup while outside of cricket, Lara would like to travel the world and open her own restaurant.

Her cricket idol is AB de Villiers and she hopes to meet him in person some day. The three players Lara would choose to have in her team are AB de Villiers, Harbhajan Singh and Jhulan Goswami.