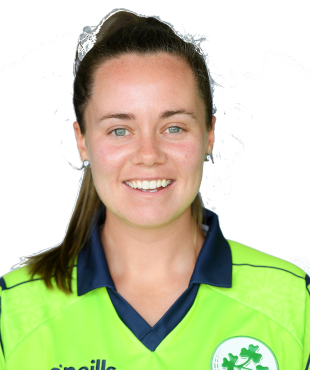 Laura Delany is the current National Women’s Captain, having been given the honour in 2016.

Delany is a top order bat who started out as a bowling all-rounder. First capped in 2010 when she played against New Zealand in Kibworth, England, Delany dismissed Sophie Devine to chalk up her first international wicket.

Laura’s proudest moment in cricket was bowling the final over in a must-win qualifying match against The Netherlands in Dublin in 2013. Defending just 8 runs, Laura did her job and sent Ireland to the 2014 ICC WWT20 in Bangladesh.

Delany works full time for Standard Life and her other interests include hockey, going out with friends and going to the cinema. Laura’s biggest ambition in cricket is to captain Ireland at a World Cup; outside of cricket she would like to pursue a career in sports science which she studied at college.

Laura’s idols are Ben Stokes and Charlotte Edwards and if she could choose three players to have in her team they would be Susie Bates, Miriam Grealey and Mignon Du Preez.