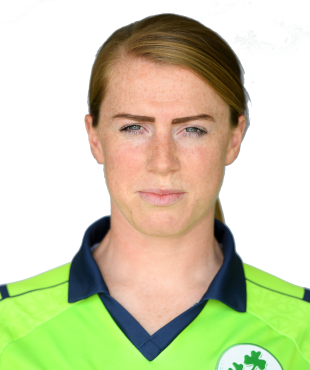 Ireland’s top wicketkeeper, Mary only began playing cricket in her twenties but she has amassed over a hundred caps since 2010 when she was first capped in the same game as both Kim Garth and Laura Delany against New Zealand.

Career highlights include playing at two ICC WWT20 competitions and opening the batting in both T20 and ODI formats while her ambitions include playing in further World Cups and qualifying from the group. Her favourite memory in cricket was winning the last qualifying spot for the 2014 ICC WWT20 by beating The Netherlands in Dublin in 2013.

Before taking up cricket, Mary played soccer at the top level, representing Ireland at senior level twice and numerous times at different youth levels. Waldron is also a keen cricket umpire and hopes to umpire a test match and World Cup final. Her idols are Julia Price and Charlotte Edwards and if she could choose three players to join her team they would be Jhulian Goswami, Nicole Bolton and Chloe Tryon.