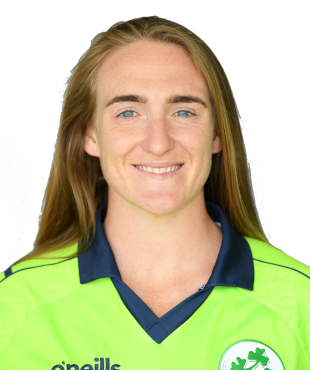 Shauna is a middle order bat with the ability to clear the ropes regularly. She made her debut against Pakistan in Sri Lanka in 2011; the day was extra special because three of her best friends made their debut in the same match. Shauna started out as a bowler and her career highlights include a seven-wicket haul in County Championships and her maiden international 50 against Zimbabwe in South Africa in 2017.

Kavanagh recently graduated from Trinity College with a degree in Neuroscience and currently works for IPB Insurance in the HR department while also running the operations side of GM By Choice, a Landscape Management Company specialising in Sports Grounds.

Outside of cricket, Shauna enjoys playing hockey and soccer when she has the time and also loves taking time to enjoy the sun when it shines!

Shauna’s proudest moments include seeing two of her Pembroke teammates, Lou Lou Little and Orla Prendergast, being called up to Irish squads and playing alongside them at international level. She is also very proud of the entire Qualifying tournament in Thailand in 2015.

Ireland are currently ranked at 10 in the world and Kavanagh’s biggest ambition is to be part of an Irish squad that is ranked in the top 8 and playing in the ICC Women’s Championships. Her cricket idol is Meg Lanning and the three players she would have in her team are Clare Shillington, Anya Shrubsole and her dad!