Hall of Fame inductees for 2021 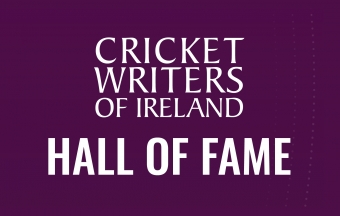 DUBLIN – Peter Gillespie, Caitriona Beggs and Jimmy Boucher were announced as the latest inductees in the Cricket Writers’ of Ireland Hall of Fame at last night’s ITW Irish Cricket Awards 2021.

Gillespie (Inductee #19) and Beggs (Inductee #20) were on hand - virtually - to accept the honour, while Boucher becomes the first-ever postumous inductee into the Hall of Fame.

“When Peter retired in 2007, he was Ireland’s most capped player – 124 games from 1995 until just after the World Cup in the Caribbean. First picked as a fast bowler, he found his feet as a middle-order batsman. In all he made 2,774 runs at an average of 27.47, but those figures do not reflect some important innings. One such came at the Lawn in 1998, when his 94 drove Ireland to a notable win over Bangladesh. He will be best remembered for his 47-ball century at Bangor in 2005, still the fastest for Ireland despite some challengers in the last decade. In 2007, Adi Birrell described him as the “heartbeat of the team”, but his team-mates knew him only as “PG” or “Polish”.”

“Caitriona played 66 times for Ireland Women from 1995 to 2008. She scored 1,450 runs (at an average 27.88), including nine fifties. She played her first women’s league match aged 8, and was on the Leinster Under-19s squad at age 11. She was a top order batter and played in three World Cups - her 68 against Pakistan is also the highest score by an Irishwoman in Test cricket. Additionally, she was top-scorer against England in 2001, when her 35 helped Ireland to a memorable win in the European Championship. And when the ICC unveiled their ODI world rankings in 2008 she was the only player from an Associate nation to make the top 20.”

“The first of our posthumous inductees is probably the greatest spin bowler Ireland has produced. First capped as a schoolboy in 1929, he soon became a key member of the Irish side and enjoyed a 25-year international career interrupted only by the Second World War. He won sixty caps for Ireland, and took 307 wickets, averaging 15.26, including 31 five-fors and 10 wickets in a match on 7 occasions. His best bowling, 7-13, was against New Zealand at Rathmines. After retirement he became an Irish selector and served as Hon Secretary of the Irish Cricket Union for more than 20 years.”

Visit the Hall of Fame to see the full inductee list.