Paving the way in Women’s Cricket 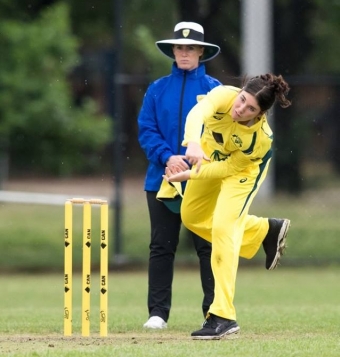 Mary Waldron umpiring in a women's match in Adelaide

Multi-talented, for sure, but Mary could have been lost to cricket before she started.

“I started playing soccer when I was about 11 with my local club Firhouse,” said Mary. “I played through my teens, reaching Champions League level through local club football.”

Things were happening on the representative front as well. She was selected for - and went on to captain - the national Under-19s team, and then in 2004 she made an appearance in the senior national women’s team in a game against the Faroe Islands (Ireland won 2-1).

“I also played hockey for Leinster, but cricket was something I came to a little later.”

Mary indicated that anyone watching her first appearances in cricket may not have pictured a future international:

“My first memory of playing cricket is at Pembroke Cricket Club - I got out for two ducks in a row in my first two games. I can’t remember anything else about the games, but do remember that I received plenty of ‘encouragement’ from the lads on the wall!”

Her game developed quickly though, and by 2010 Mary was well and truly in the eyes of the national team selectors, making her debut for Ireland in July of that year. That selection cemented Mary’s preferences on her future sporting career – it was to be cricket from here on.

“When the time came it was actually an easy decision. I felt I was an important part of the cricket team – and I was the sole keeper at the time!” she said.

At club cricket level Mary moved from Pembroke Cricket Club to Malahide Cricket Club and her international career blossomed. But one other perhaps surprising passion blossomed as well.

“I had the Community Development Officer role for Malahide one summer and part of that was to manage the Under-15s Boys team. The role included a lot of tasks, including scoring and umpiring. I found that I would look forward to the umpiring and began to take it seriously.”

“I undertook an introductory umpiring course in Hobart while playing with South Hobart Sandy Bay in Tasmania, and when I returned to play in Australia the following year I asked them to train me up properly. I have now umpired in National State Championships and on Adelaide Oval!”

Mary is now an established senior member of the Ireland Women’s team, and with the absence of national team captain Laura Delany from the recent tour of Zimbabwe in February 2018, she was handed the captaincy role for the tour – a task overlaid on her primary roles as one of the team’s openers and its first-choice wicketkeeper.

After completing the Zimbabwe tour, Mary headed back to Australia to play for Port Adelaide Cricket Club and continue her development as an umpire with the South Australian Cricket Umpires & Scorers Association.

“This season I have umpired in the National Championships at Under-18 and Under-15 levels. It has been a great opportunity to see the young cricketing talent coming through and having the opportunity to test myself in these types of tournaments is invaluable. I also was fortunate to Umpire a Country T20 Final at Adelaide Oval which was amazing and something I’ll never forget. I’m very grateful to the South Australian Cricket Association and Cricket Australia for the opportunity and experience I’ve been allowed.” Asked if she had a role-model for her umpiring, Mary was quick to respond.

“Apart from the four ICC women umpires I currently work with, I would actually single out Joy Neville. A different sport, but she is really blazing the way for women and I am so proud that she is Irish. Nothing seems to phase her.”

When asked what the future held, Mary said: “I hope one day I’ll be umpiring in a test match, but first I hope I’ll get to play a test match as a player!“

And what advice would she give a young girl considering cricket as a sport?

“I’d like to say give cricket a go, but really play any sport that you enjoy. Sport is great for making friends and sport makes you happy! But if you do play cricket – don’t worry about getting out, only think about where you are scoring your runs!”

Playing, travelling, umpiring and meeting people the world over – cricket is certainly a sport that can provide a great life experience for girls and women alike.

If you want to find out more about getting involved in women’s cricket, you can contact one of the Provincial Unions today or find your nearest local club.