PREVIEW: Ireland v West Indies - All you need to know 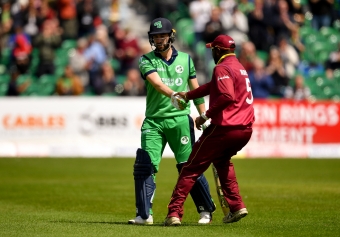 Are we set for another classic contest between these two sides?

JAMAICA - The Ireland Men’s cricket team is in Jamaica and is set to play a multi-format white-ball series against the West Indies between 8 – 16 January 2022. If the last series in the Caribbean between these two sides is any indication, we are in for an intriguing and entertaining clash. Here’s what you need to know.

While the squads for both sides have been named, Ireland will be missing Paul Stirling from the first ODI after he tested positive for COVID. He is expected to make a return to the side for the second ODI.

Ireland’s only warm-up match was played on Wednesday this week and saw the tourists fall to a five-wicket defeat, but all players involved will be pleased for the opportunity to enjoy some competitive action since the cancellation of the one-day series against the USA in late December.

The World Cup Super League series and T20I against the West Indies will be played at Sabina Park, a venue steeped in Irish cricket folklore being the ground that Ireland Men beat Pakistan in the 2007 ICC Cricket World Cup (see scorecard).

Here is what you need to know about the upcoming series.

Ireland - on the up


The Irish side was hoping to prepare for the important World Cup Super League matches against the West Indies with a solid three-ODI series against the USA, however, that series fell through and they come into the West Indian matches with just a single 50-over warm-up match under their belts, and a 1-1 drawn T20I series before Christmas against the USA.

Ireland’s talisman Paul Stirling has been ruled out of the first ODI while recovering from COVID, while the rest of the ODI squad remains available. When Stirling does return for the second ODI, he is just 18 runs shy of registering 5,000 ODI career runs.

William Porterfield looks set to open, but who will be his partner in Stirling’s absence has been the source of keen debate amongst fans and pundits. Interim Head Coach David Ripley said earlier in the week:

“With Paul [Stirling] out of the first ODI, we’ll have a bit of an internal debate now with Andrew [Balbirnie] about whether he moves up to open, or whether we pick someone maybe outside the box to go in at the top – we do have several options and I’m pretty confident we’ve got some decent Plan B’s now that Stirlo is out of game one.”

How the middle-order lines up in the ODIs will also be interesting, with Curtis Campher, George Dockrell, Lorcan Tucker and Harry Tector likely vying for three spots - but Simi Singh, who hit an ODI century against South Africa earlier this year batting at eight, may have some claims to a higher batting place.

With the ball, Mark Adair is once more Ireland’s leading bowler in the T20 format and will be hoping to bring that form into the ODI arena and Campher has become a bowler who can ‘make things happen’ - a skiddy bowler who gives his all whenever he is thrown the ball. But many hopes and expectations rest on the X-factor of Josh Little.

Little has become a potent attack weapon of the Irish side, particularly in T20s, which has seen him feature in several franchise leagues around the world. His pace, the left-arm variation he offers, and his ability to move the ball away from right-handers on a good length may trouble the West Indian batters. He did not feature in the ODIs in 2020, but his 3-29 in the first T20I of that series gave the Caribbean batters a taste of what has really emerged with greater consistency over recent years. And if yesterday’s warm-up match is any sign, Little may be bringing out his signature airplane celebration soon, and often.

In the T20I, captain Andrew Balbirnie has already foreshadowed that his move to partner Stirling at the top will continue, while Gareth Delany will likely come in at three. It will be interesting to see whether a spot in the T20I team can be found for Lorcan Tucker, who hit back-to-back half-centuries against the USA last month batting at three for the absent Delany, but the likelihood is that Tucker will remain the preferred wicketkeeper-batter in ODIs and Neil Rock in the T20I.

Expect William McClintock and Shane Getkate to get another chance batting in the middle-order as Ireland seek greater power-hitting options in the middle and late overs. The West Indies had their plans for a busy end-of-year period scuppered when they had to pull out of their tour of Pakistan after only three of the scheduled six fixtures due to COVID depleted the touring side’s squad.

Pakistan managed to overcome the West Indies in the three T20Is in Karachi, however the Caribbean side put up stiff competition. After succumbing to a 63-run loss in the first match, the Men in Maroon came within 9 runs of chasing down 172 in the second match (led by Brandon King’s 43-ball 67) and then posted 207-3 in the third match (Nicholas Pooran hitting a 37-ball 64), before seeing their large target beaten with 7 balls to spare.

In Asian conditions, the batters looked better with each outing, but the bowlers couldn’t contain the might of Pakistan’s top order - it will be a very different scenario on home soil.

The power-hitting duo of Shai Hope and captain Kieron Pollard will be lying in wait for the Irish bowlers, with Hope having racked up 310 ODI runs at an average of 62 during the 2021 calendar year. Pollard hit 137 runs at an average of 34.25 last year including efforts of 53 not out against Sri Lanka and 56 against Australia.

Hope and Pollard will also feature in the T20I batting line-up, however, the star man looking to be the 20-over vice-captain Nicholas Pooran. Wicketkeeper-batter Pooran racked up 484 runs in 2021 at an average of 25.47, with Pakistan being on the receiving end of an impressive 64 in the last match.

Hayden Walsh Jr. and Jason Holder will be key T20I bowling figures for the Windies, with Holder taking 10 T20I wickets in 2021 at a rate of 26.6, all-rounder Holder torched Pakistan with figures of 4-26 last summer.

Leg spinner Walsh Jr. was born in the U.S. Virgin Islands and actually began his international career with the USA before transitioning to the West Indies in 2019. He announced himself as a star performer by taking three wickets in three separate matches during the summer series against Australia.

You can follow livescoring of the series (inc warm-up match) here: Visit our Match Centre

Other related notes and stories